Cortona, the Capital of Culture 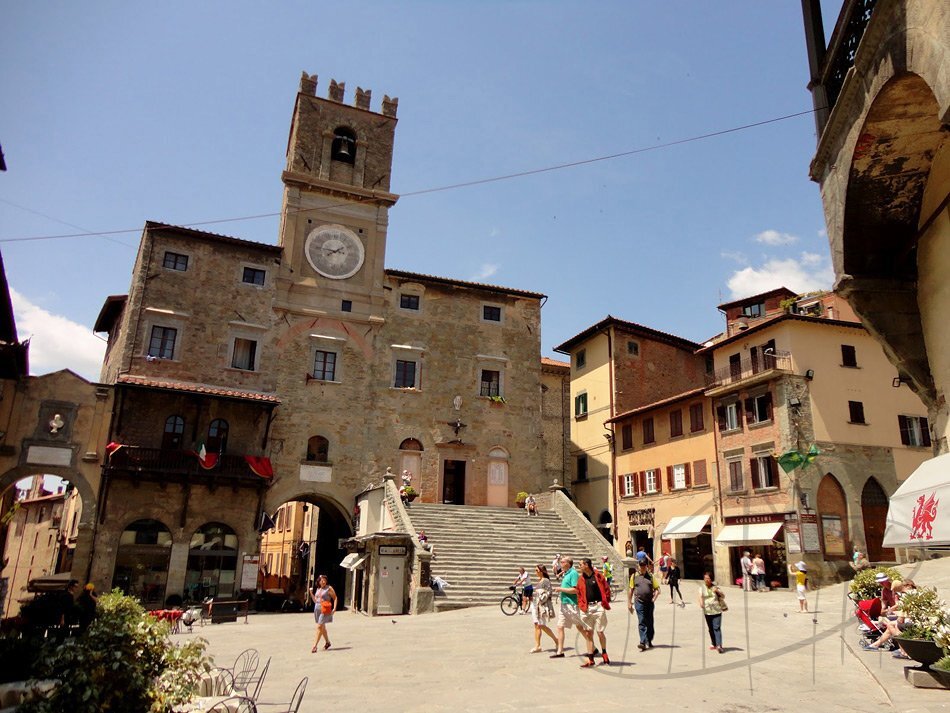 Cortona is one of the most charming towns in Tuscany and it is crowded all year around; the streets are full of fashionable art and antique shops; people wearing their designer clothes are having an aperitif in a classy bar, while waiting for the latest exclusive event. After all, Cortona itself, from its dominating position 500 metres above the sea level, seems to be saying “hey, Val di Chiana, I am the sovereign and I hold the very best!”

The town is entirely surrounded by Etruscan walls and fortifications, constituting an important archaeological element as well as one of its most beautiful features. Most of the buildings and streets in town date back to Medieval times and still hold the same charme, thanks to the careful renovation carried out. The only horizontally-running street in Cortona is Via Nazionale, leading straight to Piazza della Repubblica where you’ll be able to admire the imposing Palazzo Comunale, a Medieval building, built in the XII century, on the ruins of a Roman forum. The access to the building is through a magnificent staircase and during sunny days it’s nice just sitting on the steps, looking at passers by to observe how people enjoy this lovely town! Inside the Town Hall there is the Council Hall, with a stone fireplace from Cristofanello dating back to the XVI century.

From Piazza della Repubblica you can easily reach Piazza Signorelli, where Palazzo Casali stands. It is one of the oldest civic buildings of Cortona, also known as Palazzo Pretorio (Praetorian Palace), for having hosted the Florentine commissioners at the end of the Middle Ages. Today it houses the Museum of Etruscan Academy, where a very interesting collection of Etruscan and Roman artefacts are preserved. The architecture dates back to the XIII century and up to the XV century it was inhabited by the Casali family, an aristocratic family of Cortona. Some coats of arms, still visible, are indicating instead the following power of the Florentine commissioners. The facade of Palazzo Casali shows an XVIII century style, a result of the renovations that took place in this century.

On the same square, you can also admire Teatro Signorelli, built in the XVII century. The style adopted by the designer, Carlo Gatteschi, follows the neoclassical trend of that time. When the theater was completed in 1857, it was called Imperial Theatre or Leopold Royal Theatre in honor of the Grand Duke Leopold of Tuscany. Externally Teatro Signorelli shows a long porch with seven arcate. Through the lobby of the theatre, you can reach the horseshoe shaped hall, where the shows are held. If you are fond of theater and you have a free evening, check out the calendar, because Teatro Signorelli always offers a rich theatre season starring great actors and well known companies, that enrich the cultural life of the city. Tickets can be purchased directly from the theater. For the schedule of events or for more info, you can visit http://www.teatrosignorelli.it/ : it is in Italian, but google translator may be helpful. On the other hand you can ask us!

From Piazza Signorelli, with a 150 mts walk along Via Casali, you can easily reach Piazza Duomo, where the Duomo of Cortona (also known as the Cathedral of Santa Maria Assunta) stands. The original church dates back to the XI century and it was built on the ruins of a pagan temple, but only at the beginning of the XIV century it finally got the title of cathedral. Despite the prevalent Renaissance style, due to subsequent renovations, the church shows medieval details and some Romanesque features The Cathedral is divided into three naves, separated by a series of columns and capitals. The barrel vault that dominates the interior dates back to the XVIII century and shows some XIX century decorations. Inside the cathedral is preserved a rich historical and artistic heritage: The Adoration of the Shepherds by Pietro da Cortona, above the altar Capulli and The Descent of the Holy Spirit Tommaso Bernabei. Inside the Duomo, in the right nave, it is also possible to admire the pipe organ, built in the XIX century.

Right in front of the Duomo, you can find the Diocesan Museum, which is divided into nine exhibition rooms, where works of art dating from the II century A.C. to modern art are shown. They come from the churches of the city and from the Duomo itself. A must see is the Painted Cross by Pietro Lorenzetti and the Annunciation by Fra Angelico. The museum also exposes the precious pontifical vestments belonging to cardinal Silvio Passerini.

As you will see, Piazza Duomo is characterized by a natural terrace, with a beautiful view over the surrounding valleys, so you can take panoramic pictures with your beloved ones!

See our properties for sale in Cortona