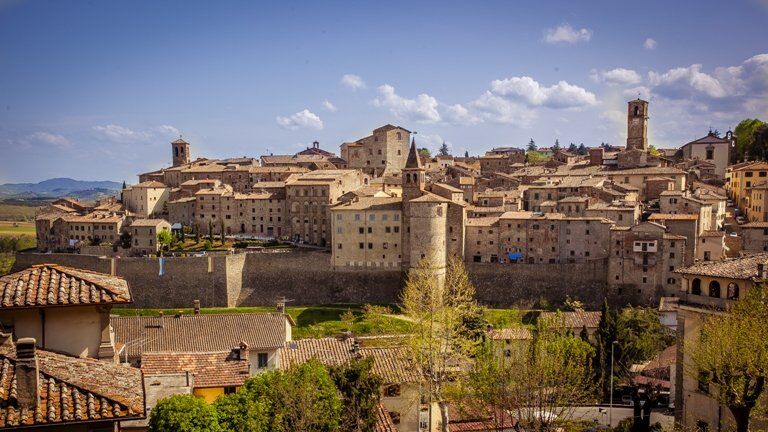 Italy’s fragmented past saw the Country divided into dozens of tiny independent states, bequeathed in a plethora of small urban settlements which offered the neighbouring countryside a place of aggregation and trade closer than the capital city.

Many towns and villages, the so called borghi, still bear the signs of their turbulent history in their interesting buildings and monuments which are a testimony of the role they plaid a few centuries ago.

Probably, in Tuscany, every stone could tell a story. Among the many charming towns and borghi one that really takes you back in time is Anghiari. A jumble of medieval houses climbs along the hill to a fortressed top. Cobbled alleys run under covered passageways linking one stone building to the next. And all around them, thick 13th century walls wrap the town in an impregnable embrace.

It is Anghiari, once one of the Florentine Republic’s strongest bulwarks. First named in an 11th century document, the town, which was founded by monks, was razed to the ground by an invading army from Arezzo and, later, by Florence. But then the locals set out to rebuild their walls and did an extremely thorough job of it.

Sheltered by nature on one side and fortifications on the other, the town played a crucial role in protecting Florence and establishing its influence over Tuscany. In 1440, for example, the Duke of Milan set out to conquer vast swathes of Tuscany. However, he met Florentine troops in the valley under Anghiari—and lost. The battle put paid to Milanese ambitions and secured Florence’s power in the region. To celebrate this, Florentine rulers asked Leonardo da Vinci to capture the episode in a fresco. His original work got lost, but we have later interpretations by other great painters, including Peter Paul Rubens.

That said, Anghiari itself is an open-air celebration of the fierce Florentine pride that saved the day against the Duke of Milan. Behind the powerful walls lie fortresses and palazzos, village houses and ancient churches in the austere, elegant lines of Tuscan architecture. Places such as the Monastero di San Martino, which started life as a monastery and became a forbidding fortress, only to be returned to the monks in later years; Palazzo Taglieschi, a set of medieval buildings restored and reinterpreted in Renaissance style; the sober Palazzo del Marzocco, home of the prominent Angelieri family; the Palazzo Pretorio, seat of Florence’s power in the town.

There are also old churches with a noble history—Sant’Agostino was founded by Saint Thomas a Becket, Santa Maria delle Grazie has a terracotta by Andrea della Robbia—as well as a soaring tower, a jewel of a theatre and an ancient square where a market has taken place continually since the 14th century. And between one building and the next stand dozens of antique shops and craft workshops selling precious linens, ceramics, lace and wrought iron furniture.

See our properties for sale in Anghiari

7 HIGH-TECH GADGETS FOR YOUR FUTURE KITCHEN

Cortona, the Capital of Culture