How to do Le Marche, Italy, on a budget 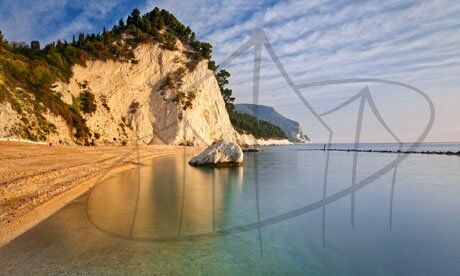 Stretching for around 100 miles along the Adriatic coast, with hilltowns to rival those of Tuscany and Umbria, Le Marche is a gorgeous and affordable region to explore.

If Le Marche seems like one of Italy’s least known regions, that’s probably because we’re looking at it from the outside. Because “the Marches” – the historic borderlands of the Papal States – more than pull their weight in the national psyche. Giacomo Leopardi, Italy’s great 19th-century author, was marchigiano. So was revolutionary educator Maria Montessori. Le Marche brought back more gold medals per head from London 2012 than any other Italian region – two-thirds of an invincible female fencing team were from one small town, Jesi. Even Lionel Messi, the Argentinian footballer, has roots there: his ancestors emigrated from Recanati in the 19th century.
The region stretches for around 100 miles along the Adriatic coast. The undulating hills of its interior are rich farming terrain, and only sparsely peppered with market towns and one-street villages. The only fast road hugs the seaside, so choose your base well if you want to take in both of the region’s cultural blockbusters, Urbino and Ascoli Piceno, without blowing the budget on petrol (now around €1.85 a litre). It is doable: stay fairly close to the main A14 and somewhere around the midpoint between the two.

Urbino
Urbino is a steep stone hill town to rival anything in Tuscany or Umbria, and just as taxing on the calf muscles. Its grandiose architecture went up during a golden age under Federico da Montefeltro in the late 1400s, when it was the capital of a powerful dukedom. One year after the duke’s death, Urbino was the birthplace of painter Raphael, whose first home still stands in via Raffaello. Local painter Federico Barocci is the star of an exhibition in London’s National Gallery until 19 May (see nationalgallery.org.uk/barocci-brilliance-and-grace). You can see a couple of his panels for free inside Urbino’s neoclassical cathedral. The economical way to see everything else is with the €12 Urbino tourist card (urbinoculturaturismo.it). Take in smaller art sites such as the frescoed Oratorio di San Giovanni, but leave most of your time for one of Italy’s best galleries, inside the Palazzo Ducale. Duke Federico’s haughty Renaissance palace houses Le Marche’s art collection, which includes Piero della Francesca’s weird Flagellation of Christ, works by Raphael and Uccello, and a study decorated with intricate intarsia inlaid wood, some of it designed by Botticelli. Duke Federico didn’t need to watch the budget – he could afford the best. (…)

Ascoli Piceno
This “city of travertine” – most of the set-piece buildings are built from this honey-coloured limestone – is the highlight of the southern Marche. It’s a place to wander, rather than check off sights from a list. Prize exhibit at the Museo Archeologico Statale on Piazza Arringo is a colourful Roman mosaic. Thanks to a mischievous optical illusion, its central figure seems to change from a young faun to an older figure as you walk around. It’s well worth the €2 admission price.
Menus around town include delicacies that don’t get much airtime outside the region, never mind outside Italy. It’s only a few euros for a paper cone loaded with filling olive all’ascolana (stuffed olives, breaded and deep-fried). Local rosso piceno wine is an affordable lunchtime partner for red meat. Finish a meal with vino cotto, a potent (and cheaper) sherry-like riff on the Tuscan vin santo. You can buy them all at Gastronomia Migliori on Piazza Arringo . Meletti aniseed liqueur was also created here. Linger over one in the art nouveau interior of Caffè Meletti on Piazza del Popolo , looking out on Ascoli’s prettiest square.(…)

Ancona and the Conero peninsula
Ancona might be your gateway. Ryanair flies direct from Stansted, and an improved rail link with Milan opens next month. Ferries from Greece, Croatia and further afield pack its port. It’s tempting to head straight out of town: it was bombed in two world wars, and earthquakes had anyway already levelled much of the medieval architecture. But that would be a mistake. Ancona was founded by ancient Greeks as an outpost of Syracuse, in Sicily, and its harbour thrived during the Roman era. The second-century Trajan’s Arch still guards the port. It also saw plenty of Crusader traffic in the middle ages. Pope Pius II died here in 1464 trying (and failing) to launch a Crusade.
The Museo della Città on Piazza del Plebiscito recounts the city’s history from Roman times to the 1960s. It is free to enter, and there’s a free guided tour on the first Sunday of every month. But to see Ancona’s real highlight, you’ll need to head uphill. A steep climb from the old town ends at the cathedral of San Ciriaco. A couple of marble lions – one grappling a lamb, the other a serpent – support its delicate Gothic porch. There’s no major art inside, but it feels instantly ancient; Corinthian nave columns were raided from a long-gone temple to Aphrodite. It’s free to enter, and free to admire the view from the piazza outside. (…)

Beside the seaside
For a day trip, the Conero or nearby Portonovo are ideal. But if you want to base yourself in a resort, Pesaro strikes the best balance between beach life and culture. It was the birthplace of composer Gioachino Rossini in 1792, and stages a Rossini Opera Festival each August. It is smaller and less hectic than Rimini, 25 miles up the same stretch of coast, though it does have the tightly packed umbrellas and sun loungers typical of Italian resorts. The Levante is the best beach for young children – an offshore tidal break and shallow shelf make bathing safe. It has a dozen or so private (fee-paying) beach services, but you can save by heading to the free section that begins opposite the southern end of Viale Trieste.

Now for some culture. Pesaro’s San Terenzio cathedral has glass panels in the floor for viewing Roman and Byzantine mosaics; take a €1 coin for the subterranean lights. The Musei Civici on Piazza Toschi Mosca have a small, high-quality art collection that includes a Bellini altarpiece and Guido Reni’s muscular Fall of the Giants. It costs nothing to admire Villa Ruggeri, in Piazzale della Libertà, an exuberant (and rare) example of domestic art nouveau architecture, built for a pharmacist in the early 1900s. (…)

Roaming inland
To discover the quieter beauty of Le Marche, spend at least a day just driving the backroads of its sparsely populated interior. Hit the university town of Macerata for the Wednesday market. Once you’ve shopped for a picnic, grab an outside table on Piazza della Libertà. Finish up near the hill town of Filottrano around dinner-time for aperitivo or a meal at Ca’ Vecchia Vino e Sfizi. Dishes served at this isolated farmhouse offer a modern take on marchigiano ingredients, such as farro (spelt), and cost around €11, or a little more if you pair each with a different local wine. It’s well worth the slight splurge for a seat on the panoramic terrace, enjoying the drifting aroma of lavender and rosemary and watching the sun set over the farmland.

Wine market in decline: only Italy beats France and grows in China and Russia