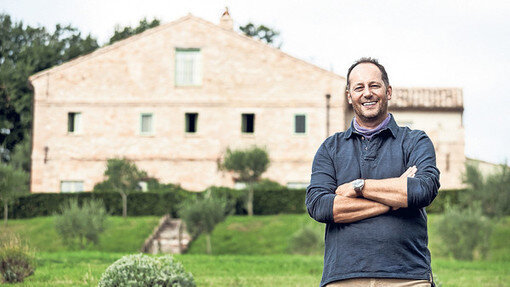 When Michael Hobbs decided to move to Italy, he thought first of the gentle rolling hills and elegant piazzas of Tuscany. It was 2005, and the British businessman had been running Adams Childrenswear for almost a decade in the UK. The role followed two years in the coastal town of Duxbury, south of Boston, Massachusetts, where he was North American vice-president of textile design company Laura Ashley.
“I was in the thick of large corporate development. Lots of pressure, private equity, big funding,” says Hobbs, 54. “My wife, Dawn, and I realised we wanted to make some changes.”

The pair were eager to escape “the grey, wet, miserable English summers and consistently miserable long springs and winters” for warmer climes and a more languid pace of life. They quickly found a Tuscan farmhouse.
Then, over lunch with friends, they changed their minds. Luisa Scacchetti, co-founder of baby chain Mamas & Papas, insisted that they visit her home in the eastern region of Le Marche.
“By the time I’d got home from the office that night Dawn had booked the flights, found an estate agent to visit some properties, and a week later we flew into [the port city of] Ancona.”
Less swamped by tourists than Tuscany, Le Marche is dotted with olive groves, vineyards and medieval hilltop villages. Wedged between the Adriatic Sea and the Apennine mountains, the couple were captivated by its landscape, from the white-pebble beaches and steep cliffs to the mountainside churches, monasteries and hamlets.

“There is a tremendous sense of calm and a real beauty,” says Hobbs. “It’s not a very discovered area. There aren’t many expats or foreigners here. That appealed. It’s real Italy. Within half an hour, Dawn said, ‘This is it’.”
A year later, Hobbs had purchased not one but four properties, almost all of them wrecks. Having worked as an interior designer in the UK, Dawn started revamping the houses. It led to the start of Appassionata, the couple’s business renovating and selling holiday homes.
In 2007, Hobbs held a family dinner with their four children, then aged 13 to 23. He gave them a choice: remain in the UK or join them in Italy.
Sebastian and India, then 14 and 20, moved out permanently with their parents that year, into an old house attached to the turrets of the medieval village walls of Petritoli, a 15-minute drive from the sea in Le Marche.
The eldest, Thomas, and youngest, Camilla, stayed to continue their studies in England at university and boarding school respectively, joining the family for holidays.

“Sebastian was severely dyslexic, creative and a talented sportsman, but not looking forward to trying to do nine GCSEs,” says Hobbs. With just two weeks of intensive language training he enrolled in a local Italian arts and vocational school.

Hobbs was amazed at the quality of the free Italian education system: in the UK Sebastian received just one hour a week of specialist help for his dyslexia, in Italy he had one-to-one assistance for a whole day each week.
Growing up in different cultures has affected the children’s temperaments. Now at Nottingham Trent university, Camilla is “more of a chip off the old block, focused on career, success and generating opportunity”, says Hobbs.
By contrast Sebastian has got “a zest and an interest in life “driven by enjoyment and experience, not materially focused”. Aged 22, he is now a “true Italian”, insists Hobbs, who not only speaks the local dialect but “has to eat pasta at least once a day”.
While largely fluent himself, Hobbs is still learning the nuances of the language. “I insist I do everything in Italian until I get lost,” he says.

The country’s complex property laws, ad hoc valuation system and bureaucracy have also proved frustrating. “It is a courtship, buying a property in Italy. I don’t think we’ve bought one that was straightforward.”
Most of the locals have been very welcoming, but the family has had to deal with some “suspicious” older residents — “they’re terrible gossips”. To avoid resentment, Hobbs employs local artisans and builders. “The number of small family businesses in Le Marche is huge: handmade lights, iron works, furniture manufacturers. Italians talk about the crisis and how hard it is and how things have changed. But in our area it’s not evident because families look after each other.
“There’s a sense of making the most of life. It’s not about getting everything done quickly,” says Hobbs. “La dolce vita — it’s about as true a phrase as I’ve ever heard,” he adds. “Italy is so much more laid-back, more family-oriented.” This appeals to Hobbs, whose daughter India and her husband Charlie also work for Appassionata.
Hobbs travels back to the family home in Oakham, Rutland, in the East Midlands, every month for work. Yet he still misses the rugby and variety of food in multicultural England. In Italy, especially in more rural areas, “if you want a takeaway it’s pizza or pizza”.

When Hobbs and his wife have friends over they don’t cook, instead asking their local restaurant to whip up homemade truffle pasta, which they then serve at home.
Other favourite regional specialities include mussels from the nearby town of Pedaso, olive all’ascolana (stuffed, fried olives) and vincisgrassi (Le Marche-style lasagne).
“We are not holiday expats,” says Hobbs. “The reason it works so well for us is that we’re fully integrated in life in Italy and we’re working. If I was just here sitting by the pool, or by the sea, I’d be bored out of my mind.”

What you can buy for . . .
£100,000 A small one-bedroom apartment in San Benedetto
£500,000 A four-bedroom stone farmhouse close to the Sibillini mountains
£1.5m A large 10-bedroom farmhouse with seven hectares of land in Amandola

● Bar Gelateria Tre Archi, Petritoli Great homemade ice cream and cakes
● Ristorante I Piceni, Ortezzano The best ravioli in the world, such as duck with truffle sauce
● Sibillini national park There is so much to see and do, plus skiing in the winter
● Beach hopping Le Marche has more blue flag beaches than any other region in Italy

4 good reasons to move to italy